Posted on January 8, 2013 by confessionsofavolunteer

Our time in St. Louis was sponsored by Virginia Petschonek. Because of her generosity and the generosity of other family, friends, and sponsors, we were able to volunteer with two organizations in St. Louis (Kingdom House and Circle of Concern) and each group gets its own blog post!

How we Found Circle of Concern

As soon as my Aunt Dianne Bennett found out that our volunteerism tour would be coming to her hometown of St. Louis, she advocated that we visit Circle of Concern. “You’ll love them” she told me. And so, St. Louis marks the first city on the tour to feature two volunteer experiences and it inspired me to do two stops (rather than just one) in several more cities as well. Aunt Dianne, you were right! 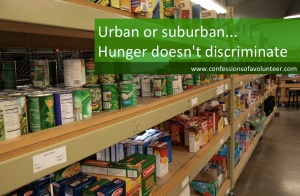 Hunger doesn’t care where you work or what school you went to, nor does it care whether you’re a homeless man in downtown St. Louis or a child living in the suburbs. The problem of hunger and need stretches across all areas of our cities, even reaching into the homes of rural and suburban families.

In some ways, those living in urban areas have an advantage when it comes to accessing services. The outreach groups are more numerous and closer together than they are in the suburban areas. Those living beyond the traditional city core experience a different type of need. Circle of Concern was founded to reach out to those in western St. Louis county and focuses on providing services, like food assistance, to people in this area. I also want to share with you how they got their name: “In the mid-1960’s rural poverty was common in western St. Louis County. Individuals from a handful of local congregations began meeting to coordinate help for these families. They arranged their chairs in a circle so that all members were equal during the discussion.” This emphasis on equality and cooperation is prominent in their programs today.

When we arrived at Circle of Concern, we were greeted in the front room by Operations Director, Sada Lindsey who showed us around their facility before putting us to work. One of the first areas we saw was what I’ll call the birthday room. Sada told me that one of their famous volunteers Bobbie Siesennop was working the front desk one day when a little boy came through and told her proudly that he’d just had a birthday.  When Bobbie asked the boy about his birthday celebration he told her that he didn’t get anything for her birthday. As the story goes, Bobbie decided then and there that every child would have a birthday gift from Circle of Concern, so she started making birthday bags. Each bag contains toys, party supplies (like cake mix, birthday candles, and party hats!) and is topped with a stuffed animal. We also learned that Bobbie’s basement is packed full of supplies for the bags and she has even started taking over others’ basements for the same purpose. Go Bobbie! 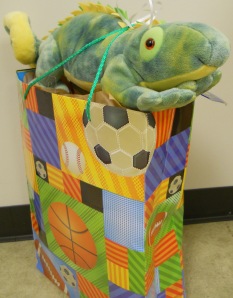 Birthday bag for one of the children at Circle of Concern. Every package is topped with a stuffed animal. 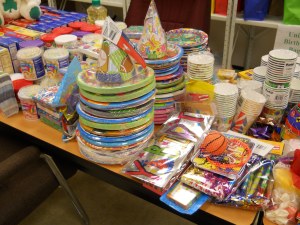 Bobbie with toys for the birthday bags

As you might imagine it’s a big undertaking to collect and assemble all of these packages, but Bobbie has pursued this mission intently – even turning her basement into a holding area for all of the toys!

Next Sada showed us the food pantry and one of our first stops was at the produce refrigerator or as I like to call it, the fruit fridge. According to Sada, “Families come to Circle Of Concern once a month and receive a 7-10 day supply of fresh food. A food order consists of fresh produce, milk, eggs, frozen meats, canned goods and personal care items.” Because really, would you want to eat canned green beans and mystery sloppy joes for a week? And even if you were willing to, that’s not a healthy diet.

I loved Sada’s enthusiasm when she showed us the fruit fridge and I quickly noticed their generously sized portions. Each family gets a full bag full of fruits and vegetables like apples, oranges, pears and onions.

I’ve noticed a recent trend among food pantries to provide more in the way of fresh food, rather than all canned or boxed items. Fresh produce offerings are becoming more common, but this was one of the more abundant packages I’ve seen so far. The reason this is so meaningful for me is that I’ve been places where some people are quick to dictate what others should eat and they dish it out with the attitude of “you’ll take what I give you and you’ll like it.” This approach only serves to reinforce the barriers between those who have and those who need. It’s tricky to provide fresh produce for several reasons: 1) it can be expensive 2) it’s rarely donated and 3) it’s perishable – sometimes produce spoils within days whereas the canned variety can stay fresh for years. So if it’s so difficult to do, why do it? While there are many reasons to offer produce, I believe that these types of programs send the message that we’re all equal and deserving of good food: “Sure it’s more work, but you’re worth it.” And judging by the cornucopia of produce at Circle of Concern, they must really love their clients. 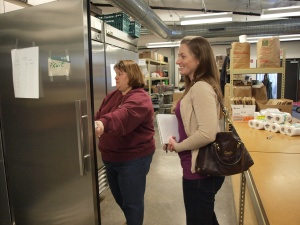 Sada and Sarah at the fruit fridge

Rebekah and I spent the rest of the afternoon preparing food bags for the pantry visitors. We used a cheat sheet to help us determine how much of each type of food was supposed to go into the bag, and while doing this, Rebekah and I both made a similar observation. Without thinking about it, I was trying to select the “good” food for each bag, except this was mainly determine by my own test – would I eat in? In other words, no one would get green beans, but everyone would get spinach. I realized that this was probably a little ridiculous and I mentioned to Bek that I was only pulling things I liked even though it was for someone else. Rebekah said “Me too! I just realized I was doing the same thing!” Objectively, it does seem a little silly to pull food for a complete stranger based on your own preferences, but I suppose it’s a natural human tendency to want to give things that you like and share them with someone else, rather than “subjecting” them to something you don’t like. 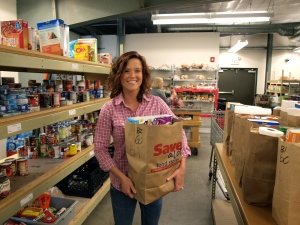 Each visitor received two tightly packed paper bags of goods plus the produce, fresh bread, eggs, milk, meat, and personal care items. The personal care items are extremely important because they can’t be purchased with EBT, which means many families go without or have to scrounge for resources. When you think of things you’re thankful for, does toilet paper ever cross your mind? It should. Of all the things we take for granted this may seem like a small one until you and your family are completely out of it for a week.

Circle of concern has a unique system for keeping the two bags together – they draw matching pictures on the pair so they know which bags are a set. If you’ve ever seen me draw, you’ll know why I stuck to simple things like stars and Christmas trees. Rebekah was a little more creative and drew two volunteers on her bags. I’ll let you guys who they are.

We drew matching pictures to keep the bags pairs together. Rebekah drew the two of us on the left set of bags.

While there, we also met some wonderful volunteers. Ginny M was from Jersey and she talks like it – not just her speech, but her hands as well. She enthusiastically waves her arms around when she talks, so much so that Rebekah’s arm was caught in her path once or twice! Ginny mans the front desk and her biggest source of anxiety is around the computer (com-pew-dah?), but she says it’s worth it because she loves volunteering here so much. 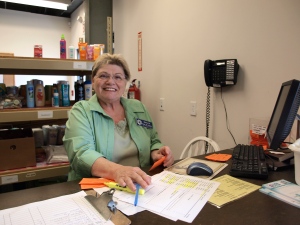 We also met “Nana” (Jane Lemonds) and her grandson TJ, who is actually on staff at Circle of Concern. With them was Nana’s honorary grandson Justin. Rebekah and I were so impressed with this trio for so many reasons. First, Nana is incredibly kind and extremely proud of her grandson(s). She practically glows when she talks about TJ and Justin and how proud she is of them. TJ inherited his grandmother’s thoughtfulness, offering us drinks and sharing information about the processes at Circle of Concern, which is something that many more-seasoned volunteer coordinators don’t do. TJ talked confidently and eloquently about the importance of the center as well as the joys and challenges of managing volunteers as well as customers. Did I mention that TJ is only 17? I kept forgetting how young he as because of his confidence and maturity. Similarly, his friend Justin showed dedication to the food pantry as a volunteer and said that he volunteers every Friday when he has a day off from his job. I also learned that TJ and his mom open up their home to any of TJ’s friends who need a place to stay. At the time, they were currently housing two other teens. When I asked Nana about this, she beamed at the mention of her daughter (TJ’s mom) and her grandson, obviously proud of their generosity. It seems the feeling is mutual among the group – when Nana moved out of earshot, TJ and Justin gushed about how wonderful she was.

TJ, Nana, and Justin – an incredible group with strong ties to Circle of Concern

TJ and Justin talked with us as Rebekah and I finished filling the bags for the day and I asked TJ about how many volunteers it takes to make the pantry run smoothly. He pointed to a set of lockers with volunteer name tags on it (like the ones  you see Justin and Ginny wearing). 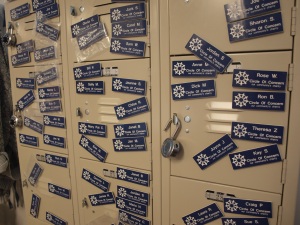 This is just one small section of the name tags. In short, there are hundreds of volunteers that help Circle of Concern accomplish their mission.  TJ and Justin invited us to come to their next stop, which was preparing the Santa Shop. The infamous Bobbie would be there as well. We had to decline, but we were tempted to go. At volunteer events, I rank my experience on a scale from “how soon can I get out of here to how soon can I come back.” At Circle of Concern, not only did I want to come back, but I didn’t even want to leave! I’ll see you guys next time I’m in St. Louis. Thank you for the wonderful experience!

Please support our grass-roots volunteerism project! We’ll be traveling the country to highlight non-profits and inspire volunteerism coast to coast. If you like our work, please consider donating to our efforts!

1 Response to Volunteer Bound: Circle of Concern in St. Louis