Posted on November 26, 2012 by confessionsofavolunteer

The St. Vincent DePaul soup kitchen has been running in an old radio station on Cleveland and started from humble beginnings. Local church members handed out a few sandwiches from an old popcorn stand.

The demand has grown and 200 people a day come to St. Vincent DePaul in search of food and clothing. As you can imagine, you need a large kitchen and a lot of space in order to feed so many people and this organization has been looking to expand, but the process was complicated for many reasons. First of all, they wanted something within easy walking distance of the current location because so many people have come to rely on the services in that area. This restriction dramatically limited the viable options for expansion. In addition, many of the businesses in the area will protest the addition of a soup kitchen because it “draws the wrong crowd” and “scares the customers.” After a lot of searching, St. Vincent DePaul secured a space (within walking distance of their current location) on Monroe just off North Cleveland. 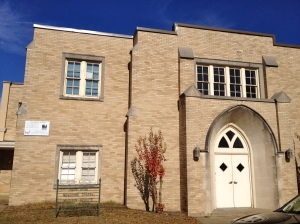 The great news is that the building will be large enough to provide for hundreds, but there’s a lot of work to do, including constructing a kitchen from scratch. I spent the morning washing down the walls so a team of volunteers from GE can paint this week. The work was straight forward, but the highlight was talking to the other volunteers.

While I worked and scrubbed with Marsha, I noticed that there were two teenagers there helping. To be honest, I expected to hear them grumbling about the fact that their dad had dragged them in on a Saturday to get their mandatory service hours. What I found was something entirely different!

I told the group about my project and asked if I could talk with them for my blog and they agreed right away. I learned that Merryn (12) and her brother Logan (17) really enjoy volunteering and that they participate regardless of the service hours. I was so impressed with both of them! They were so focused and mature! When I asked about why they enjoy it, the responses came pouring out. Logan said “We come from a really privileged area and we don’t normally get to see a lot outside of our bubble.” He said that he’s been volunteering for several years and talked about the first time he remembers seeing true poverty, “I had no idea that people could live like that. People with nothing would come in with a smile on their face to get their only hot meal of the day. They didn’t just leave smiling – they came in smiling. If I was in their position, I’d be coming in grumpy” he told me.

I asked Merryn volunteer experience and she said that she really enjoys helping people. “I believe that the people we’re caring for are Jesus in disguise” she said. One of her favorite projects was working with Project Outreach (featured earlier in Day 20 of this project) because they adopted a family and shopped for the things on their Christmas list and then delivered these gifts to the family. Merryn described in detail what gifts they bought and what the home looked like. It obviously made an impression on her and I assumed it was a recent experience. I thought to myself that she must’ve done that last year when she was eleven. When I asked how long ago it was, Merryn said, “I was five.” I was stunned at how much she recalled and what an impression it made. I asked it she also remembered how she felt after their visit and she recounted, “I remembering thinking that I felt so lucky to be able to help them and luck to live in a nice neighborhood.”

I looked at their Dad, Fritz, in awe. Almost without thinking I asked what he did to get his children to turn out to be such incredible people. He looked a bit bashful and uncomfortable with the praise, although just below the blushing I could see that he was beaming at his kids. He explained that they tried to raise their children to be compassionate and grateful. He attributed a lot of it to prayer, church, and talking with them about empathy and helping others.

After a short pause, Logan jumped in. “I’ll tell you what did it for me. When when were younger, Merryn used to call me a ‘little boy’ and it drove me crazy because I wanted to be a grown man. I looked to my dad and he talked about what real men do – helping others but not for honor or glory – when no one else sees you but God sees you.” This comment from Logan prompted Frtiz to add that he and his wife used to donate and volunteer very quietly – so quietly that even their kids didn’t know the extent of their work. “But we realized that while we don’t want the glory, that it’s important to model the behavior that we want from them. Sometimes we see Logan sneak money into the basket at church. I think he thinks that we don’t see him do it but we know.” I looked over at Logan and realized that he had inherited his dad’s bashfulness.

Merryn echoed Logan’s sentiments about looking to their parents as a role model. “I know Dad doesn’t like the attention” she told me. “He’s humble and modest.” I looked to Fritz to confirm this to see that he was definitely embarrassed. I think was flat out astonished when Merryn said, “When I think about helping others, I ask myself WWDD – what would Dad do?”

Sometimes the most incredible thing about a volunteer experience is someone you meet along the way. In this case, three amazing someones.

Donate! Every bit helps and your money goes to a very worth cause. Contact Peter Giannini to donate kitchen supplies or equipment to the new facility.

If you’re thinking about volunteering with this organization or in general, but aren’t quite ready to jump in, email me at sarah.petschonek@gmail.com. Thinking about helping is the first step!