Posted on November 30, 2012 by confessionsofavolunteer

Did you know that 39% of children in Memphis live in poverty? That means more than a third of our children worry about things like having a warm coat and getting enough food each day. According to Therese Guistatis at Catholic Charities of West Tennessee, that’s twice the national average.

In June of this year, Catholic Charities started a Mobile Food and Clothes Pantry, which visits four different churches in the Catholic diocese (which includes all of Memphis and over to Jackson, TN). 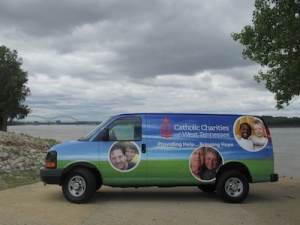 I love the idea of a mobile pantry for many reasons. First, there is a lot of poverty in the suburban and rural areas of Memphis, but most of the services are located in or near downtown. It can be difficult for families to access these resources because of the travel involved and because many of these places are only open during regular business hours when people are working. Providing a mobile service in the late afternoon means that Catholic Charities will be able to reach more people across the Memphis area. I joined this incredible effort on their visit to Resurrection Catholic Church in the Hickory Hill area of Mendenhall and had an opportunity to learn about their mission and the families that they serve.

The food pantry efforts in this area go to serve many families in the Hispanic community who attend Resurrection Catholic School, which is one of the Jubilee Schools in the Memphis area. I talked with the school’s principal Stephanie Anderson and asked how the food pantry has made an impact. She explained that many of the families told her how grateful they were – not only for the fact that they were receiving food, but that the food pantry team made an effort to provide food that was familiar to the community. The team went to the school and church to find out what types of foods are most wanted in the Hispanic community and they try to tailor the food offerings based on the families’ preferences. 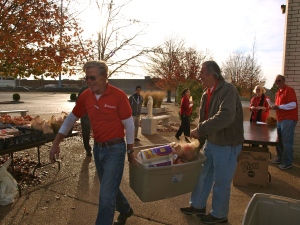 The Hispanic community is unique in several ways. Most of the families were very quiet during their visits and I got the impression that they did not want to be asking for help and were somewhat embarrassed to be receiving food donations. Mrs. Anderson confirmed this for me and explained that most of the families strongly desire to be self-sufficient and to provide for themselves. They see asking for help as a short coming and they’re very quiet about it. In an effort to be sensitive to their desire for privacy the food pantry sets up shop in a side parking lot well after the students have been dismissed from school for the day so that the parents and families have a little more discretion about picking up the food.

I was talking with some of the volunteers and they all spoke of how frugal and hard working the families are. As Mrs. Anderson described, the team makes an effort to select foods that the family is most likely to use. Back in the summer, they noticed that some of the families would return food if their family was unlikely to use it so that it could benefit another family in need. “They have a strong sense of community and they don’t want to waste anything” one of the volunteer told me. Within seconds of that statement, a family arrived to pick up their food and the mother returned the paper sacks from their pick up the previous month. Even the paper bags are treated with care. It’s pretty amazing to see.

While I was there, I mostly helped with carrying boxes of groceries out to the waiting cars in the parking lot. I noticed that most people were reluctant to let me help and I get the impression that they would have preferred to carry the groceries themselves as a simple gesture that they were committed to earning their food. Sometimes it’s hard to know whether your help with carrying groceries is perceived being helpful or if it’s just another reminder that they are relying on others for help.

I was talking with Felix Pesce about his role with the food pantry and why he devotes so much time to this particular effort. He said, “I didn’t want to go through life without a purpose and I’ve found that as log as you’re helping others, it’s hard to stay inside your own head. You don’t realize how miserable you are [with material possessions] until you step out of it.”

One of the amazing things about this project is that I learn about so many things along the way. While I was there, I met the “Clothing Man.” Bob Boord had been living an unhealthy lifestyle and had a heart attack several years ago. After that experience, he decided to give up smoking and spend the money on a worthwhile hobby. The Clothing Man drives around town buying up clothes at garage sales. As the story goes, he collects up the clothes, sorts them in his garage, and then transports them to a warehouse near Winchester. He periodically loads up his van and gifts the clothing to local groups like Catholic Charities and MIFA. What an incredible man! I met him briefly but learned his story from Mrs. Anderson and I hope to track him down for a future blog post!

It’s people like the Mobile Pantry team and the Clothing Man who are making a difference in our community. Therese Gustaitis agrees and explained that a strong volunteer base enables Catholic Charities to reach many more people even with limited resources.

You don’t have to be Catholic to serve or to be served. Regardless of your religious preferences, your help is welcome (and needed) at the many outreach opportunities at Catholic Charities. “Need knows no boundaries of ethnicity, age, faith or gender. Neither do we” – Catholic Charities

Volunteer! There are many ways to help at Catholic Charities. Contact Therese Gustaitis at Therese.Gustaitis@acc.cdom.org for more information about volunteering. You can work with:

If you’re thinking about volunteering with this organization or in general, but aren’t quite ready to jump in, email me at sarah.petschonek@gmail.com. Thinking about helping is the first step!

What comes after the 30 Days of Mission Memphis? Volunteer Bound! I’m traveling across the country to promote volunteerism and I want to take you with me!